Some things are hard to explain. Quite why extraordinary French drama 120 BPM Beats Per Minute) wasn’t even on the long-list for an Oscar nomination for Foreign Language Film is a question that has baffled many.  One suspect politics and prejudice might have played a part.

Still, the film, set among AIDS activists in Paris in the early 1990s, recovered by winning Best Film at France’s own Cesars last month, along with five other awards from among its 13 nominations, and it has gone on to be hailed an instant classic of queer cinema.

Even in a banner year for gay or LGBT films meeting with mainstream success (God’s Own Country, Call Me By Your Name, Battle of the Sexes, The Handmaiden and Chilean Oscar winner A Fantastic Woman), 120 BPM stands out for its eloquence, power, emotion, political energy and sex.

After impressive commercial success in France, the film is released in the UK next week hoping for similar crossover popularity. It certainly deserves it. 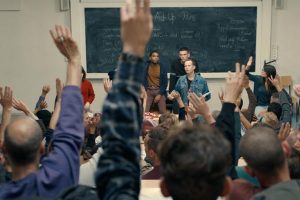 Directed by Robin Campillo, 120 BPM (it has had several variations on that title – in French it is 120 Battements Par Minute) opens – “sometime in the early 90s” – with a briefing for some new recruits moments ahead of a meeting of the Paris branch of Act Up in what looks like a medium-sized lecture theatre. The real Act Up was founded in 1989 to draw attention to the AIDS epidemic and the lack of the Mitterand government’s support, information and education around it. In weekly meetings, Act Up members shared medical reports and debated ways of forcing the issue to the forefront of the news and political agenda.

The film centres around five or six of these meeting scenes, which capture the fears and urgency of the times, as well as the desperation and passion of a generation that was rapidly dying out.

Amid a large cast of 70 speaking parts, the viewer gets to know the faces of several characters. We follow them out onto the streets as they put their plans into action, creating demonstrations, some of which go quite far in terms of disruption in order to get publicity. Stunts include throwing exploding bags of fake blood at pharmaceutical company executives, or lying down in the streets, gatecrashing high schools to hand out free condoms, or a joyous cheerleader routine chanting satirical slogans at the Gay Pride march.

Concentrating on the group aspect of the activism, director Campillo, who himself joined Act Up Paris in 1992, also captures the aftermath of the action with great skill. Often, the characters will be travelling on the metro, recovering from running away from the police or, if they have been arrested, being released from custody and discussing how they were treated in the cells. Interspersing these with club scenes is particularly clever, moments of group ecstasy woven in and out of the narrative, where the bodies writhe and hands reach up in hope.

Then there are the sex scenes (not done in groups, one should add), fairly explicit yet tender and crucial to explaining the emotional and physical lives of characters about whom the audience come to care deeply over the course of the film’s two-hours-plus running time.

Among the most memorable aspects of the film are the little details of the meetings, such as the strictly observed rules of protocol. Instead of applause, members signalled approval of something by finger clicking; disapproval was met with soft hissing. And despite the fervour of the debate, the atmosphere always seems very respectful, a camaraderie prevailing. 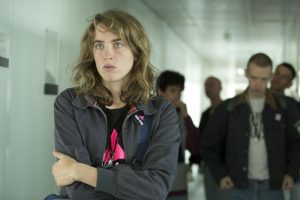 Adele Haenel is one of the better known members of the cast, an actress who’s starred for the Dardenne brothers in The Unknown Girl and for her own partner in real-life, the writer-director Celine Sciamma in Water Lilies. She plays Sophie, a key activist fighting for life-saving drugs to be made available by a big pharmaceutical company.

“This collective way of acting was very new for me,” she told me. “We spent a lot time together when shooting. Usually, you do your scene and then you can leave, but it felt like we were always all in it together. And you never knew if you were on camera or not, so you didn’t want to relax and do nothing. That simply wasn’t possible. It kept you always doing something, even if it was just listening, but you made sure you were recreating a life on camera.”

Such is the quick-fire nature of the meeting scenes, I wonder how much of it, if any, was improvised? “Not at all,” she counters. “I was amazed – we did one week’s rehearsal where we did improvise, like a month before shooting, and when we all came back, Robin had re-written the scenes with some of that dialogue that came from rehearsal, and after, we never deviated from that. It’s only when there was not text for you, no dialogue, I guess you could say you were improvising because you couldn’t relax for a moment, so you had to invent what you would if there was no specific text for you.”

Arnaud Valois plays Nathan, a newcomer at the start of the film, and one of the few activists not to be sero-positive. He is, in many senses, a surrogate for the director himself, who begins by slowly getting to know the other members, to learn about AIDS and how to deal with it before becoming a key player in the group.

“I think there were three cameras moving around the room, so you were always acting because you know you could always get picked up. Robin the director is also a great editor [he won the Cesar for that, too] so he will bring together shots of you that you didn’t even know he’d got.”

In the film, Nathan begins a relationship with the flamboyant Sean, a young man dying of AIDS but still committed to the Act Up cause despite his fears and weakening body. If anyone can be said to be the film’s star, it’s Nahuel Perez Biscayart who plays Sean – he won the Cesar for Best Newcomer and it’s his joyfully defiant face which adorns the films poster, displaying that famous pink triangle symbol on a black T-shirt.

“What I learned is that this wasn’t an ideological struggle, but an intensely physical and personal one,,” says the half-French half-Argentinian actor. “For Sean and his friends, it was like, you have no choice. If you don’t want to die, you simply have to be out there, fighting.”

I remember the time well. I lived in Paris in the early 90s and spent a lot of time dancing in gay night clubs, because they had the best music (and the best drugs). It’s interesting that both 120BPM and Mia Hansen Love’s 2014 house music film Eden capture this era in Paris so faithfully, both focusing on the communal nature of the club scene and the underground aspect of organising meetings and nights. It doesn’t feel that long ago, but it was before mobile phones and social media and young people watching today must be slightly intrigued by the flyers and faxes and wonder how on earth anyone ever made an arrangement.

“I know for our generation it is different,” admits Haenel, who was born in 1989. “And I know that for people from the older generation, watching our film is like seeing a ghost. They are amazed by how accurate it is. And that’s all down to Robin Campillo. He knew how the atmosphere should be.”

Says Biscayart: “You know, at the time nobody was talking. There was no information and that made them so angry and it pushed them to be more bold in their actions. Somebody had to take notice. I think a lot of young people feel that way today, even with all this social media, that people aren’t listening to them, so to see how you can do it, bring about change and be political is very inspiring.”

Valois agrees: “These guys had other jobs in the daytime, so it being in Act Up was like having second life. They had to make their own time to go to the meetings, to go on the marches, to pull the stunts. It was a big risk and big commitment, but they knew had no other choice. I think it’s also about pride, you know. They don’t want to apologise for who they are, and that is also a very inspirational message for young people these days.” 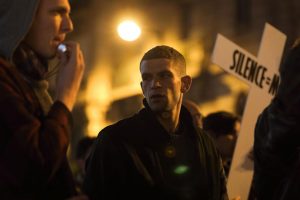 Of course the film isn’t without its tragedies and most viewers will be in tears at some point. The relationship between Nathan and Sean becomes a centre piece, beautifully played and pinging between ecstasy and agony. They perform the film’s sex scenes, perhaps the most explicit in a major piece of French cinema since Blue Is The Warmest Colour’s lesbian scenes.

I have to ask the actors how it felt to perform them. “Having sex in front of lots of people isn’t something you do a lot,” says Biscayart. He pauses. “Well, not me, anyway… but actually, it’s the crew who are far more nervous than the actors.”

Valois agrees: “Yeah, we were quite relaxed, you know, you have to be at ease with your body, and be ready to experiment and play, really, but then you look up and everyone’s sort of avoiding your eyes and shuffling around.”

As a recreation of an era, 120 BPM doesn’t need period clothing or retro props. Haunted and lifted by the wail of Jimmy Somerville’s falsetto vocal in a remix of Bronksi Beat’s Small Town Boy that plays as a refrain throughout, it concentrates more on the climate of fear that brought a community together, the worries, the defiance and determination, the group collective and the common cause, whether that was music, sex or AIDS and the unified desire for the establishment to take its head out of the sand and listen. Watching these young men and women in Campillo’s amazing film, you realise just how much of a debt society now owes them and their struggle.

And although 120 BPM indeed takes its proud place in the history of queer films and in the media representation of a community, this isn’t about just shifting attitudes around sexuality and freedom, both in life and on screen. Far more simply, you realise just how many people must now still be alive because of what they did.

120 BPM (Beats Per Minute) is released in UK cinemas on April 6, It plays as a Special Gala Presentation on Saturday 24 & Sunday 25 March at BFI Southbank as part of the BFI Flare LGBTQ Festival  (Europe’s largest gay film festival).