One of the great modern film makers doesn’t feel too good. Claire Denis has got cramp in her knee (Claire’s knee, I know…) and says she hardly slept a wink because the wine she was drinking the night before disagreed with her.

Plus, she can’t get her phone to charge. “These English plugs, you know…” she mutters. Slightly embarrassed, I flick the plug switch to on and the phone pings and lights up. “Ah, ca marche!”, exclaims the director of Beau Travail, White Material and Chocolat. “Et comme ca, tout va bien dans le monde.”

I apologise for the clumsiness of English electrics, which surprisingly sets Claire Denis off on a lengthy reminiscence of her love for all things English. “But I love the plugs here, so solid and sure, with their three holes. And I love the way the door handles are so low down. And driving on the left, I love that too…”

It turns out that the director known for her explorations of French colonial legacy in Africa – where she grew up – and in Paris has been in love with England since her teens. “My Dad studied at Oxford for a year and spoke excellent English and he wanted me to, so I was sent as a very young girl, 12 years old, for the summer to stay with families here. The first I remember was an amazing house in the New Forest and the Dad was a fireman and of course in the summer in the forest, this was a very important job. But the girl, she was more developed than little innocent me, so this didn’t really work as a relationship. But I remember the smell of the baked beans for breakfast and the jam on bread. I loved that and I felt right at home.

“The next year, I remember I was in Cornwall, looking after children in Plymouth, and I drank so much tea. And then, I fell in love with an English girl.” 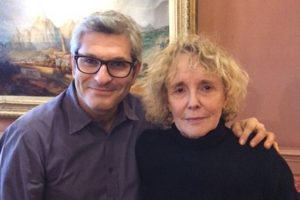 Me with Claire Denis

Denis is in full flow. “She was called Diana, from Bethnal Green, and she was superb. She had amazing dresses, brown hair and her own cool style. Her mum was a seamstress and she made her amazing things. And we worked together on a crappy cruise ship full of old English couples going to the Canaries and Morocco and on to Senegal. What a ball we had, such a close, girly friendship, there is nothing like this in the world.

“I admired Diana so much and I remember coming off the ship and back at her house and listening to the Yardbirds and Radio Caroline and thinking England is so cool, I must live in England and I have to be an English person. I didn’t want to be French, it was so old fashioned and dull.

“I was pen friends with Diana for 15 years. One summer we even worked together at Harrods. And then I fell in love with Eric Burdon, with The Animals and then with his band War. Ah, you can’t imagine how much that music meant to me…”

I’m amazed by Denis. The 71-year-old director has a husky voice, bright eyes and a restlessness. She’s flexing that cramp her knee, lying on the sofa, extending her leg up and down, sipping her tea. She laughs throatily at my coffee order of a “white flat.”  “C’est quoi, ce nom?”

She’s talking in a mix of French and English, a combination of wistful, sentimental yet very matter-of-fact. I’m conscious we haven’t got round to talking about her films yet, particularly her latest, Let The Sunshine In, with a superb Juliette Binoche, but I’m fascinated by her Anglophilia when I’d always associated her with Africa.

“Ah, I would have stayed in England and become English,” she continues. “I loved those films you had here in the 1960s like A Taste of Honey and Alfie, such great cinema, your own New Wave. But I had to go back to France for one thing: cinema. I couldn’t have worked in British films and I knew that in my life, I had to make films, so Paris won me for that reason only. There was something special going on with film there, a sacred and secret world and I dived in.”

I wonder, then, with her Anglophilia, what she makes of Brexit. “Oh I don’t care about that,” she says with admirable certainty. “When you talk about Eric Burdon’s music or my films, that goes beyond Brexit. Art travels, so Brexit doesn’t mean anything in those terms. But, I’m more worried about the schools and the hospitals and the poor people. You know, the rich, they will manage, they always do, but it’s the poor who will suffer and who get lied to. We are always at the mercy of political systems, but only the poor become the victims. Plus, they end up paying the bill.”

At last we move nearer to the domain of her films, modern classics such as her wonderful debut in 1998, Chocolat, and her brilliant work with Isabelle Huppert as a colonial landowner during an African rebellion in 2009’s White Material. Or her study of French men on manoeuvres in the Foreign Legion in Beau Travail from 1999. And the magnificent 35 Shots of Rum, about an extended black family living in Paris. These are films about systems and politics, about characters trapped in situations beyond their control who nevertheless try to exert their own agency and cling to their humanity, through love, through music, through belongings and mementoes. 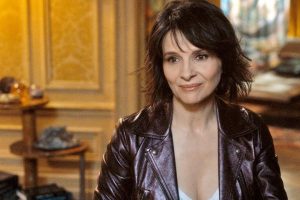 And now comes Let The Sunshine In, in which Binoche plays, Isabelle, a middle-aged Parisian artist, separated from her husband and looking for new love. Or maybe love is looking for her. Either way, she can’t seem to untangle herself from her heart. “I’m obsessed by my emotional relationships,” breathes Isabelle, tortured by the end, exhausted by her hearts beats yet ever-hopeful.

When we first see her, she’s having sex, rather unsatisfactorily. Soon after uncoupling from the rutting man on top of her, she’s extricating herself from a failing affair with an arrogant, married banker (Xavier Beauvois). “I think she loved him once, but it’s over now,” says Denis very firmly about this guy. Then Isabelle is given the run around by a married, alcoholic actor to whom she can’t help feeling attracted.

Meanwhile, there’s a guy (Bruno Polydades) she keeps bumping into at her local fishmonger who’s always inviting her a the weekend away at his house in the Lot. And when she does go down there eventually, she meets another bloke on the dance floor of a night club, who whisks her around to Etta James’  passionate bluesy balled At Last.

“That’s her song,” says Denis, “That’s the key to her character. She identifies as Etta James, defiant, vulnerable like all of us, strong and not afraid of her body and trying again, always hoping the real thing will come at last.”

That dance floor lover seems promising, for a while. “Maybe he was the right one for her,” says Denis, “But she doesn’t see what’s right in front of her. That happens to all of us.”  And soon enough, Isabelle is briefly flirting with the possibility of something with  another artist (Denis regular Alex Descas) and finally, she’s being proportioned by none other than Gerard Depardieu in a very strange and talky therapy session that plays out over the end credits.

Let The Sunshine In (the French title is Un Beau Soleil Interieur, suggesting it’s about finding one’s own internal source of happiness) has been billed as a romantic comedy, and in her constant desire to meet the right guy, Binoche’s Isabelle does seem comic at times, although melancholy is never far away. It’s a rom com in the way only Claire Denis could make one, impressionistic and incomplete – and not exactly funny. You don’t expect a happy ending. “Nobody can expect a happy ending,” says Denis. “But I believe it can happen.” 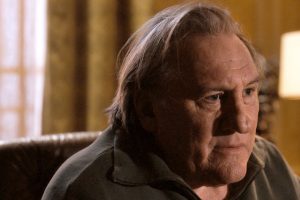 This film, it seems to me, is her most personal, intimate work, dealing with the vagaries of the heart. Her previous films such as Vendredi Soir dealt with female frustration while the controversial Trouble Every Day had Beatrice Dalle and Vincent Gallo as sexual vampires who brought new meaning to the phrase: eat your heart out. Claire’s last film was called Bastards, a very dark work about child kidnap which, I confess to her, I absolutely hated. After Bastards, Let The Sunshine In came as as refreshing relief. Was it for her, as director, too?

“I certainly wanted to do something different in mood from Bastards,” she says. “I’m sorry you didn’t like that one. It’s true, it wasn’t perfect for me either, and I was feeling I hadn’t said what I intended with that film, so I got to work on a new script straight away and Let The Sunshine In is what came out.”

Like much of Denis’ work, the film is about hidden desire. “Yes, desire is like an antenna. It’s the first feeling we have, that little delicious question of: ‘Is it possible?’. It alerts us to what we want to do, it’s a flicker but it tells us a lot about what’s inside. Sometimes it will be fulfilled and we can act on this desire, but other times, we can’t behave as we desire. In this film, I wanted to see how it mixes with sexuality. Because, yes, sexuality, is the most important thing – along with money.”

Did she have Binoche in mind for the role of Isabelle? “Not at all. The only time I wrote with someone in mind was White Material, which was always meant for Isabelle Huppert. But not this time, I’ve known Juliette Binoche for 30 years – we have the same agent but have never worked together. But she read this script, and rang me up, completely to my surprise, to say: ‘I want to be this person. Isabelle, c’est moi.’ And I didn’t hesitate.

“Juliette’s an extraordinary actress. She goes away and works on the character by herself. Then we discussed her look, her body, what she’d wear, always in these tops, you know, décolleté. When I said: she’s Etta James singing At Last, the character was complete.”

I have to wonder how much of Isabelle is in Denis herself, the restless artist always looking for the next story, the next affair. “Quite a lot, you know. I have had similar experiences, certainly. I have been divorced and now I have a partner, sort of. We don’t live together….”. She drifts off, flexing her knee again.

But then she starts up, unprompted. “Anyway.. I missed one love, and I still regret that dearly. But I was also very lucky with another….”  and she tails off wistfully.

It’s fascinating and thrilling to discover that Claire Denis in person talks and thinks the same way she tells her stories on film. I’ve seen and loved so much of her work that, although we’ve never met each other before, I feel like I’ve spent time with this person next to me now, pulsing from thought to thought,  creating image upon image, building up emotion in layers.

She smiles and sighs. “So, life is… wow. Love is… that thing, that thing that is… needed. Even if it is sometimes painful.”

Let The Sunshine In is released in the UK on April 20.