Today was Barry Norman’s memorial service. Subtitled It’s A Wonderful Life, it was held at the “Actors’ Church”, which is St Paul’s in Covent Garden.

I was honoured to be asked to speak at the service, representing film critics.

So I joined an illustrious band of eulogisers including Lord David Puttnam and Barry Cryer, as well as family friends of Barry, such as his business partner in Barry’s very successful pickled onions venture, John Wringe, and his producer of many years on the Film ’73-98 show, Bruce Thompson.

The service was a rather beautiful, graceful event during which the speakers each contributed a new facet or anecdote to build up a very personal and full portrait of Barry, warts and all (though in truth, there weren’t too many warts…). 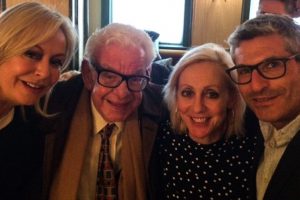 Here’s me with Barry’s daughters Sam and Emma Norman and that other great Barry, Cryer – the comedy legend read out a poem to his old mate Barry which, he said, he had “written while waiting for a laugh in Lowestoft”…

Barry’s daughters Emma and Samantha have given me kind permission to reprint in full here the speech I gave at the service:

Hello. I’m Jason Solomons and I’m a film critic. As a former Chairman of the Critics’ Circle Film Section, I’m here to thank Barry on behalf of all film critics, a large number of whom have come along to pay their respects to him today. Officially, The Critics’ Circle would like to send its condolences to Barry’s family while wishing to recognise the outstanding contribution Barry made to the profession and to the Circle itself.

The Normans – Barry, and his daughters Samantha and Emma – have been valued members and supporters of the Circle for many years and there can’t be a member of the body who doesn’t owe some debt to Barry.

At the Critic’s Circle summer Party just a few days after we learned of Barry’s passing last June, there were many who told me privately that they wished to register their thanks to Barry, saying he was the reason for their very choice of profession, the inspiration for alerting them even to the fact that you could watch films – and talk about them – for a living.

Barry regularly attended our annual awards ceremony and I had the honour earlier this year to pay him a warm in memoriam tribute at our 2018 awards. I was amazed by the number of people who came up to me afterwards to agree with how much he meant to them. And I’m not just talking about critics here, but many of the nominees and guests: film producers, actors and directors. “It was Barry’s review we waited for,” said one. “That was the show you wanted to be reviewed on, good or bad,” said another. “You held your breath and crossed your fingers every Monday night,” remembered another, before adding: “And you either kissed the TV screen or wanted to throw your tea at it…”

As critics, Barry showed us all how it should be done. He was charming, erudite, enthusiastic; he was knowledgeable and opinionated but never conceited or belligerent and never pompous. He smiled and twinkled and was witty, even as he gently crushed a producer’s dreams. He was, for the most part, fair. And for the most part, encouraging.

He could be grumpy, but as the son of a director, he understood film makers, so he knew what movies could and should be, what standards should be met and what messages they could convey, what meanings they could have – best of all, he knew how to articulate his thoughts with that wit and authority and most of all warmth.

These are ingredients which meant the households of the nation allowed Barry to sit in their living room with them, in his own special chair, letting them know that if they ever did want to get off their sofas, there were some films they might fancy. He became like a member of the family, the one who knew about movies, who’d even met a few famous film stars but never really bragged about it, even if, after a few glasses of wine,  he did go on a bit about Michelle Pfeiffer (I didn’t have a crush on her, honestly…)

You see, being part of a family, was what was really important to Barry. His matter-of-fact attitude meant that movies-  and their stars and directors – were important, yes, but they weren’t everything. You really felt he had other things to do, places to be, such as watching Spurs, or the cricket, or having a decent lunch.

And here we are today, surrounded by Barry’s family, friends, colleagues, acquaintances, a kind of inner circle that expands when you’re a public figure to include many people who felt like they knew Barry, because he’s talked about their work, praised it or disagreed with it, supported it or said ‘not for me’, but also because they feel like they’ve sat with Barry and had a chat. He was a mate, a mentor and a master, often all at the same time.

Anyone lucky enough to have actually chatted to Barry in real life will know what fun and mischief that could be, how wide the conversation might range – from languages to literature, sport and politics and food and drink. He would be funny, seriously committed and passionate, but he was polite with everyone, had time for anyone, unless they were rude. He couldn’t stand impoliteness and bad manners, which is why his film criticism came with charm and empathy. He knew what his wide audience wanted and expected from their movies.

Barry led the way. He knew on retiring that the movies were about to go into a vortex of super hero summers and he knew he wouldn’t miss that. Barry was best on TV but he also wrote beautifully for the Radio Times and, later, The Daily Mail and The Lady, never leaving his Fleet Street roots. He loved to think of himself as a journalist but he also wrote novels and memoirs and had a go at film scripts. He appreciated the work that went in to making films, into acting, writing and directing. He didn’t dismiss that lightly.

I remember him at Cannes, where he always turned slightly pink, to match the wine. I remember him at our Circle Awards, chatting to Lord Attenborough or Quentin Tarantino. I remember him loving Bringing Up Baby and epics and Westerns. He liked blokes’ classics, like Gladiator and Lawrence of Arabia but loved British comedies like Kind Hearts and Coronets and Gregory’s Girl or Hollywood gems such as Ninotchka or musicals such as Kiss Me Kate. He loved Airplane! and Paths of Glory. He loved Lubitsch and Wilder, Eastwood and John Wayne. He liked films with big heart, soulful and emotional, nothing too fancy or too clever clever, films in which good triumphed over evil, where men got the job done and were rewarded with a kiss.

So this is a salute and a kiss from the rest of us critics because Barry sure got the job done and was rewarded with a wonderful life.

Criticism, like life, is a balance – and Barry got both just right.