When his floozy boozy Mom (Bette Midler) goes missing, Billy finds himself transplanted from Connecticut (“where Chloe Sevigny is from”) to his gruff father’s mansion in a southern state and plonked into the local high school.

The kids there don’t exactly appreciate Billy turning up on his first day dressed as a cross between Adam Ant and Boy George and soon Billy finds himself beaten to within an inch of his life by masked jocks.

Thanks to the unlikely friendship of one of the school’s football heroes called Flip, Billy is nursed back to health and returns to school determined to take on the bullies and the hate… by running for Homecoming Queen.

Such transgressive behaviour makes the local news and sets him against the mean girls, lead by Abigail Breslin’s Trump-quoting, God-invoking rival. Can Billy win enough votes with a campaign that basically involves glamour, glitter and threatening to out a few people who’d rather hide their own sexuality? 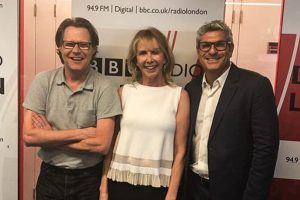 Trudie Styler joined me and Robert Elms on our BBC Radio London show today to talk about making her debut as director.

Directing, for the first time, is Trudie Styler whose credits as a producer range from Lock Stock to Moon and American Honey. Her style is colourful, warm and inclusive, if occasionally a little clunky. But she wisely lets Lawther run riot as Billy, in a succession of outfits – mermaid, Uma Thurman in Pulp Fiction, Zelda Fitzgerald, Corpse Bride – and sweet, campy gestures. He’s lovely to watch and just prickly enough to undergo a few character changes himself.

Perhaps the film could have been funnier, tougher in its satire (it isn’t Mean Girls), but there’s enough going on in the anti-bullying pro-acceptance message and, through Lawther’s performance, it captures the maelstrom of teenage feeling and you’re left in no doubt about wanting to embrace everyone’s inner freak.