Samuel Maoz won the Golden Lion at Venice for his amazing film Lebanon in 2009, a film which was set entirely inside an Israeli tank, the outside world only viewed through the viewfinder of the vehicle’s gun. 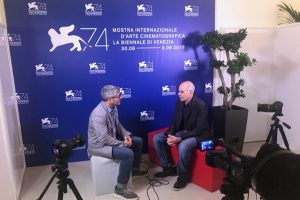 Maoz returned to the Lido with Foxtrot, his first film since, and again the Israeli military in his sights. This time, Maos roams a bit wider with a film in three acts. The first deals with the Feldman family, mother Dafna (Sarah Adler) and father Michael (Lior Ashkenazi), who get a knock at the door. It’s some soldiers, informing them that their son Jonathan has been killed on duty. Dafna faints and has to be sedated; Michael goes into a numb shell and is ordered to drink a glass of water every hour.

This systematic approach to handling grief is chilling, a machine set in motion. Ashkenazi plays it brilliantly, his eyes blood red, his face frozen but we can see his brain whirring with anger and fear.

However, their life spirals out of control even further when the soldiers come back again, five hours later with some more news from the front. Maoz shoots from all angles, the rooms and walls closing in on the Feldmans, their minds, their world spinning.

The action then cuts to the front, to Jonathan’s unit in the desert where he mans a checkpoint. His company is formed of three other young soldiers, all of them looking a bit clueless and scared, eating potted meat and stopping the occasional car – or a camel.

This section is filmed in surreal colours, and looks curiously old-fashioned, with rusty containers and dirty toilets and creaky computers. It’s a stylised, absurd vision of the young Israeli army – and it would be funny were danger not lurking with every approaching car. Turns out, the young soldiers are more dangerous to themselves than anyone else. 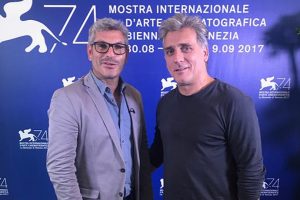 Me with star Lior Ashkenazi

Maoz has a third act, returning to the Feldman’s smart Tel Aviv apartment which is now rather untidy – all the clean lines of their art and furniture messed up. Things have gone to pot, quite literally.

Husband and wife seem estranged and they will come together over recriminations and accusations in a superbly written stand-off that fills in the blanks of what’s happened.

Foxtrot is a bizarre, puzzling but stylish and impressive approach to telling a strange story, a fable of fate set against years of military trauma.  It covers the spread of Israel’s generations, from German-speaking Grandma Feldman suffering Alzheimer’s in a home but still bearing wounds from the Holocaust, to the anguished cartoons found in Jonathan’s notebook.