When you’ve made one of the most famous and most dangerous Italian films of the century, it might be easy to beat a retreat. 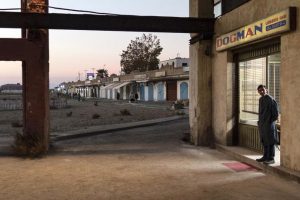 But Matteo Garrone is not that sort of director. Ten years after he made Gomorrah and lifted the lid on the pervasive power of the southern Italian mafia (the Camorra), he’s back on similar terrain with his latest film, Dogman.

Roberto Saviano, the man who wrote the original book on which Garrone based his movie, remains in hiding under police protection (although still makes regular appearances on TV talk shows) yet Gomorrah is now on its third season as one of Europe’s most-watched TV shows while Garrone marches on as one of the leading lights of a renascent Italian film industry.

“I’m not involved in the TV show,” Garrone tells me, with a certain disdain. “I don’t want to be because the approach is very different. I’m not at all jealous of it even though it’s probably even more popular now than when I made the film. For me, the crime aspect should be an opportunity to talk about the human condition, the relationship between death, life and the desire to change yourself.

“You can say many things about my movie of Gomorrah, but you can’t accuse me of glamorising crime. I make it look very miserable, no? I shoot with the real criminals, too, but I don’t name names. I want to show how human beings live in a system of fear and loyalty and how they survive in this jungle. I wasn’t about denouncing individuals, but I saw how they were inspired by cinema, how they based their whole manner on baddies from films. I had a friend who was an architect and one of the mafia asked him to build him a house and he gave him a DVD of Al Pacino in Scarface and told him: make me a villa like Tony Montana’s.”

Dogman has a similarly heightened relationship to reality. Garrone again shoots in Campania, the hard-scrabble region south of Naples and away from the glamour of the Amalfi coast. It’s the story of a dog groomer, Marcello, played by Marcello Fonte, in his first major role – for which he won Best Actor at the Cannes Film Festival last May.

Marcello deals with these caged beasts in the run-down housing estate (shot on the real-life, abandoned seaside resort of Villagio Coppola), but he’s having trouble handling local bully Simoncini (a bruiser of a performance by Edoardo Pesce), who’s always banging at Marcello’s door, demanding more of the cocaine the dog trainer deals on the side.

Soon, Simoncini drags Marcello along on one of his robberies before forcing him to help in an even more stupid crime, one which will get Marcello into ruinous trouble.

Fonte is perfect in the role. He’s sweet with the dogs, which range from cute chihuahua to growling, teeth-baring monsters and pitbulls, and he has something of the lap dog about him, too. Dogman is also the story of the weak man finding some revenge amid the grim wreckage of his life.

“I fell in love with Marcello when I first saw his audition tape,” recalls Garrone. “He has a wonderful face and a tendernes as well as this comic aspect, which was crucial for me for this story, because I wanted it light and funny at the start and then to get darker. He has a face that comes from an Italy that is disappearing , the old Italy of the south. It’s a face from Pasoloni films, you know, like the actor Ninetto Davoli.”

As well as casting real life mafiosi in Gommorah (the segment of the film with the two wild young boys was also filmed in Villagio Coppola), Garrone has a habit of finding his actors in the most unlikely places. For his 2010 film Reality, about a Naples fisherman dreaming of going on Big Brother, his lead actor couldn’t attend Cannes because he was still serving a 22-year jail sentence. Finding Marcello Fonte was just as unusual, a “tragic coincidence”, as Garrone describes it.

Fonte comes from a poor rural family and travelled to Rome dreaming of working as an actor. He lived rough in an old theatre that had been converted to a homeless shelter. After a while, Marcello became the place’s caretaker and would watch when local community groups used the space for rehearsals and drama rehabilitation programmes for offenders.

“I sent my casting director out to find interesting faces and on one day he popped into this old theatre,” recalls Garrone. “Well the guy who was playing the lead role in the rehearsal had a heart attack in the bathroom and died. Marcello was the caretaker, so he arranged to clean up the body and then, because he’d been watching the actors, volunteered to take the dead guy’s place. That’s when my casting man spotted him and made a tape of him for me to watch.”

Fonte’s presence makes the film, and it’s a fairytale story for him to have gone on to win at Cannes. “But he is still living at that place,” remarks Garrone. “What I look for is someone who has a background that lend the character something deeper, so it’s a marriage between the character that I’m writing and the actual person. Reality always plays a part for me.”

While the face-off between the simpering Marcello and the hulking Simoncino forms the chief drama of Dogman, the other stars of the show are the dogs. Crucially, the canines are never allowed to be too cute, the trap film makers often fall into when using animals. “Yes, they can become substitutes for emotions and I wanted them for different things – the dog in the first scene, which is a huge one, he’s a metaphor for what’s to come, the theme of the whole story. I wanted to show how a peaceful guy will have to handle the threat of violence around him, how he can tame it and stroke it but still be trapped.”

I wonder how Fonte, an actor of little experience, could work so freely with these animals? It’s quite extraordinary watching him caress them and talk to them, taking on some of their characteristics. “Well it’s really a story about a loss of innocence and Marcello is like a child and the dogs seemed to respond to him. I let him just improvise with them, which was a bit dangerous with some of the bigger animals I guess. But he was calm. I was more nervous because I was holding the camera going in very close to Marcello and these big panting dogs, so if he ever got bitten, I would be next in line.”

There’s something more political at play here, too, an eternal battle between the weak and the mighty and I ask Garrone if the current climate in Europe and Italy might have fed into the film while he was making it. “Definitely something was happening. What I like about working in Italy, is that it’s a place with many different universes, both ancient and modern, and I think when you make a movie, period or contemporary, it’s vital you put what you feel about your own life and society in there, so probably in Dogman there is a hint about this wind of right-wing power that’s coming everywhere, that’s in there somewhere.

“The question became: how do you survive this, get through it, fight for your own opinions? But it’s not as simple as saying, oh the bully Simoncino is the right and Marcello is the good guy on the left. It’s much more complex, I hope. It’s a metaphor of an Italian society and universe: how does a person live in a world that is increasingly violent around them?”

While Italy itself, like much of Europe, is going through a vigorous political shake-up, Italian cinema finds itself in one of its strongest positions for years. Before its release, Garrone’s Dogman – already put forward as his country’s entry for the Foreign Language Oscar – has its UK premiere at the upcoming BFI London Film Festival, alongside seven other Italian films.

“Yes, it’s a good moment for our cinema,” he says. “What’s important is that this generation of very different film makers and genres, we’ve found an audience in Italy and outside Italy and we are not known for just one type of film anymore.”

That said, Garrone’s next project couldn’t be more Italian. It’s a production of Pinocchio, attempting to be true to the original work of Carlo Collodi. “It’s my career suicide,” he says with a big laugh. Because Pinocchio, like Don Quixote, has always held something of curse for those who dare make it.

“Maybe I’m a masochist,” says Garrone, showing me artist drawings of the special effects and prosthetics he will use for his vision of the story. “The first storyboard drawing I ever did was when I was six years old (his father was a film maker, after all) and it’s of Pinocchio and I still have that drawing, on my desk now, to push away any bad luck. I think all my films have had something of Pinocchio in them, people dreaming of becoming something else with a wish.”

He will being filming his Pinocchio early next year, using Italian actors, all in Italian. He has just discovered that his version will have some stiff competition as Disney are making a live action version of their own famous cartoon.

“Mine will be a much darker version I’m sure, but they are a big competitor, of course, and we are in a direct race. It’s a bit like Dogman – they are the big bully, and I’m just the little Italian guy trying not to be bitten.”