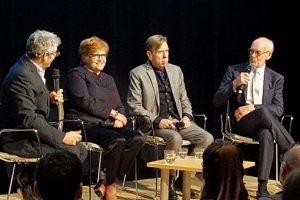 This panel presented a potentially difficult mix of talents, in front of a sensitive yet receptive audience. I got Tim Spall to talk about portraying – brilliantly – evil in the form of David Irving, the Holocaust denier. I asked Deborah about being played by Rachel Weisz and director Mick Jackson about navigating his way through a landmark court case and the issues of history. The tone was serious, particularly after such an important film, but I felt I had to introduce some warmth and humour to the evening, which came in Deborah’s passionate politics and Tim’s fascinating insights into his acting methods. It was an illuminating and inspirational debate and gave the film a ‘buzz boost’, making it a must-see among a vital audience for the movie.