At the 37th awards in London last night, I had the honour of presenting the Dilys Powell award for Excellence in Cinema to the great Isabelle Huppert.

Here is a copy of my speech, which set us up nicely for a standing ovation from the audience which contained, among others, Naomie Harris, Kate Beckinsale and Ken Loach.

I thought it’d be worth having a reminder of Isabelle’s talents ahead of the Oscar nominations in which she may well feature. 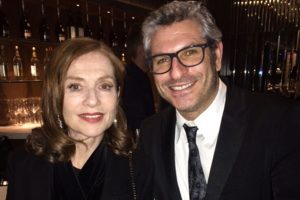 Me with Isabelle Huppert

I hung out with La Huppert in the May Fair Hotel bar after and she told me she was starting filming today near Paris on her sixth film with the director Benoit Jacquot, a remake of Joseph Losey’s Eva.

She was also rather hopeful that her new film with Michael Haneke, Happy End, will be unveiled at Cannes this May, but is sworn to secrecy about it other than to say Calais and the refugee crisis serve as the backdrop.

Far from her scary reputation, Isabelle was charming, funny and chuffed with her award and she posed happily for selfies. She had also been doing her research on Dilys Powell herself and been looking to buy her books to read some of her criticism. “I hope she liked some of my films,” she said.

I even introduced her to Rebecca O’Brien, Ken Loach’s producer and we had a little Palme d’Or battle – Rebecca has won two (Wind That Shakes the Barley, and now I, Daniel Blake), to Isabelle’s one, for Amour, although Huppert has got two Best Actress titles from Cannes.

Anyway, here’s the speech, some photos (featured), and the list of winners:

A great honour to be with you tonight to present what is so often the highlight of the evening but is certainly the highest honour we can bestow at the Critic’s Circle, yes, worth even more than a good review.

Because, in a sense, it’s the best review you’ll ever get, a review for a spectacular career, for an outstanding body of work that has delighted us, intrigued us and earned our admiration over a number of years and a number of films.

Named in honour of the redoubtable critic Dilys Powell, I fancy she’d have been hugely in favour of tonight’s recipient.

We haven’t often ventured abroad in bestowing what we affectionately know as The Dilys. I note that Charlotte Rampling and Kristin Scott Thomas are on the list –  so we’ve been edging towards going full French for a while. and tonight’s honouree certainly speaks French with aplomb.

But that’s the least of her accomplishments. In over 100 films, she has worked with and inspired some of the greatest names in cinema, and some of the most varied – Claude Chabrol, Michael Haneke, Michael Cimino, Maurice Pialat, Hong Sang Soo, Rity Panh, Claire Denis, Bertrand Tavernier, Hal Hartley and just this year alone Paul Verhoeven and Mia Hansen Love.

What is unusual about this mega-star is that she is never the attraction – her characters are, her work is, her total immersion in the moment and the story. For all the great names I’ve just mentioned, I’m sure even these stylists and auteurs would admit, these films are Isabelle Huppert movies. She dominates but never distracts, she is mystery yet we think we always know just what her character is thinking, We might be able to read her but we never get to the end of the story.

There is always more. Most years, she’ll have two or three films out as well as a stage role – a quick look at Imdb tonight reveals seven films in pre or post production and a couple of films awaiting release as well as TV projects. She’s the Queen of Cannes, having opened the ceremony, won Best Actress there twice, and even been Jury President.

She has two Volpi Cups from Venice, 15 Cesar nominations, a BAFTA and a Golden Globe. The woman is one of the great true artists, a rare talent whose intelligence shines through in all her characters who, you feel, are lucky to be being played by her, as much as we always feel lucky to be watching them, watching Isabelle Huppert bring them to life, watching her work like a sculptor, building layers and stripping them away.

It is always breathtaking to watch, a constant surprise, a stare that dares us to predict at our peril – the only thing you can be guaranteed is utter conviction, total devotion and amazing results, whether classics or experiments, period or modern day: Les Valseuses, The Lacemaker, Loulou, Heaven’s Gate, Coup de Torchon, Madame Bovary, La Ceremonie, The Piano Teacher, 8 Women, White Material, Amour, Elle and Things to Come

Let’s have a treat, since we’re here to celebrate cinema – and look at one of the great artists of cinema at work and remind ourselves what sheer screen mastery can do.

Ladies and Gentlemen, I’m delighted to award this year’s Dilys Powell award for excellence in cinema to Isabelle Huppert.”

The full list of winners for the 37th London Critics’ Circle Film Awards:

DOCUMENTARY OF THE YEAR – Fire at Sea

BRITISH/IRISH FILM OF THE YEAR – I, Daniel Blake

ACTOR OF THE YEAR – Casey Affleck – Manchester by the Sea

ACTRESS OF THE YEAR – Isabelle Huppert – Things to Come

DIRECTOR OF THE YEAR – László Nemes – Son of Saul

SCREENWRITER OF THE YEAR – Kenneth Lonergan – Manchester by the Sea