After that Saturday night it was hard to gird oneself for Sunday but I did make it to the Jim Jarmusch film Paterson, which stars Adam Driver as a man called Paterson, living in a city called Paterson, New Jersey, where he is a bus Driver (geddit) – and also a secret poet.

If this film were any more laid back it would be asleep, which I nearly was. I have to say I really did not like it. The tone is twee and folksy, painting Paterson as a man out of time, with his lunch box and his “Hi Honey I’m Home”. Everything looks a bit period, a bit 1950s, even the bar run by a jowelly black man named Doc, who puts famous Patersonians on his wall of fame – Lou Abbot, Dave out of Sam and Dave, Allen Ginsberg.

Driver deadpans his way through and scribbles his poems in his notebook, a neatly self-contained man in love with his beautiful wife, who I found was irritatingly, patronisingly played by Iranian actress Golshifteh Farahani. She has a bulldog named Marvin who rather dominates proceedings. I do not much care for dogs in the movies.

It all felt bogus to me. I didn’t get its charms or jokes nor revel in its delight at the quirky eccentricities and poetry of ordinary life. It felt forced to me, and you can’t have laid-back drollery if it feels to studied and poised.

It was the first film in Cannes which made me angry. 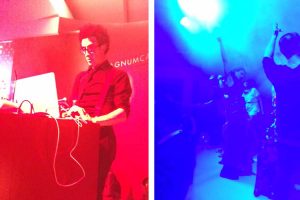 So, despite not needing another late night,  I went to the American Honey party. It was, to use the right phrase slammin’ – the young cast were all there dancing on the stage in one writhing mass of energy and sexiness. The brilliant DP Robbie Ryan, who shot this film and the Ken Loach movie, was on the decks (or iPod) and whipping up the crowd. Until he played Chas n Dave. Seriously.

Chloe Sevigny was there (not for the Chas n Dave), obviously being reminded of her days in Kids. “These guys are way cooler than we were,” she told me. She’s directed her first film, a short which plays later in the festival. “It was so much fun – I thought I’d be scared but I actually loved it,” said Chloe.

Shia Labeouf was stomping around (bit smelly, actually) with a bodyguard in tow, occasionally joining in the dancing but mostly storming off to tear around the place and make sure nobody and everyone recognised him under his cap and with his jumper on his head. Yuh. Bit of a one, that one.

But it was a great party and my star of the festival, Sasha Lane, who plays Star in the movie was clearly having a great time and lead much of the dancing. Congrats, too to Ben Turner at Earworm for getting all the film’s music together to fit director Andrea Arnolds’ requests and to the films’ producers at Pulse, Thomas Benski and Lucas Ochoa.

The night finished, as does the film, with the gorgeous soul country anthem I Hate Hate (but I Love Love) by Razzy Bailey. Bit of an old sunset Ibiza tune this one, hadn’t heard it for years, which definitely makes it my Tune of the Week from Cannes.

Monday morning brought Jeff Nicholls’ Loving, a very downplayed drama about an interracial marriage in 50s Virginia that altered the constitution. I did like it, but actually wanted it to be a bit more cheesy. It deliberately avoided genre cliches of soaring music and big impassioned speeches in court houses to concentrate on the ordinariness of the Loving couple, played by Joel Edgerton and Ruth Negga, who were hounded out of Virginia.

A quiet movie about a monumental event that probably didn’t appear monumental to the couple at the time.

The evening brought Olivier Assayas’ Personal Shopper, with a great performance by Kristen Stewart at its core. It’s a might strange film that drew some impolite boos from the crowd but which certainly had terrific moments -it’s a horror movie about a young woman, Maureen, who is personal shopper for a super model type and who is also a medium (I thought everyone in fashion was a x-small…?)

Maureen is trying to contact her recently deceased twin brother Lewis and she stalks the corridors of their childhood mansion trying to get a message from the after life. Assayas makes these scenes genuinely unsettling and scary and Stewart plays them brilliantly.

It’s also got the best texting I’ve ever seen in a film. Whole pages of dialogue are done thru texting, and the pacing of it is very impressive.

Parts of the film are silly but they don’t seem it to Stewart’s Maureen, who is wholly enveloped in her own drama, even while going about the ludicrous excesses of her job, picking up Chanel dresses and Cartier jewels for her boss and taking on her personality when she guiltily tries some of the outfits on.

Things turn murderous and mysterious yet remain coldly, coolly stylish and off-centre, not surreal but unreal. It’s a very interesting take on the horror genre, by virtue of not really being in any discernible genre at all yet having one of the most iconic stars of the recent vampire genre front and centre of nearly every shot. Very Cannes.