Many awards were dished out over the weekend. Closest to home were the BIFAs, which are often caught trying to do something different yet also make an impression at this early stage.

They gave 4 awards to Alex Garland’s Ex-Machina, a sci-fi which I liked very much for its execution and smooth telling, although it’s not ultimately a stand-out for me. I liked Garland’s screenplay and the visual effects were very impressive (and crucial to the telling), so these were always its most likely win categories. Taking Best Director and Best Picture will have surprised everyone, including Alex Garland, I should think.

Especially perverse were the shut outs for 45 Years and for Amy. Just as Andrew Haigh’s nigh-perfect film was getting nothing in London, the LA Film Critics awarded Charlotte Rampling Best Actress. And just as Amy missed out on Best Film and Best Doc at BIFA, so it won the doc category in LA.

All of which shows no one’s any the wiser this year, although I doubt BIFA doc winner Dark Horse will get much love anywhere else, enjoyable though it was.

What’s really weird is that Suffragette won only one award, and that was for a male performance. Even if that’s for the doughty Brendan Gleeson, I’d have thought this was the one area BIFA might have been a bit smarter and made a more political point. But no, its main awards went to a film about men creating the ultimate sexual male fantasy in the shape of a lady robot… 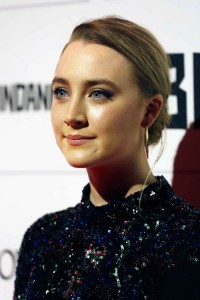 Perhaps the most significant move of all to come out of the BIFAs was Saoirse Ronan’s win for Best Actress in Brooklyn. She also carried off a few other wins – New York Film Critics and Washington Film Critics – so is looking very good for an Oscar nomination. Now 21 years old, this was very much a coming-of-age performance, and it carries the movie brilliantly, so a leading actress nod would go very nicely with the supporting nomination she earned for Atonement in 2007, at the age of just 12.

Also noteworthy from the BIFAs was the win for Room as Best International indie, a film which I’ve been backing to go all the way and out of which I expect actress Brie Larson to be a very strong rival for Ronan through the season.

That isn’t to discount Cate Blanchett and Rooney Mara in Carol, although still no one’s quite sure if they should both go up against each other in the Lead category. New York loved Carol, going for director Todd Haynes and the film itself, as well as screenplay and Ed Lachman’s wonderful cinematography. Still, I can’t believe Sandy Powell’s costumes in Carol haven’t won anything yet, although the awards so far don’t have separate costume categories and just lump them under technical achievement/craft hold-alls.

Anyway, where’s Maggie Smith in all this?  Her Lady in the Van is magnificent and shouldn’t be ignored – I suspect BAFTA will come to the rescue on this if nothing else.

Always wanting to be different, the LA Film Critics weighed in at the weekend too, with much love for Mad Max Fury Road, something I don’t really share (it’s loud, they go for a drive, they turn round, they come back again, it’s still loud). It won Best Director for George Miller as well as cinematography for John Seale and production design.

Géza Röhrig in Son of Saul

Michael Fassbender’s Steve Jobs was LA’s best actor, while the aforementioned Rampling took actress; in the supporting categories, Michael Shannon’s performance in 99 Homes, much-praised on this site a few weeks ago, took the honours alongside Ex-Machina’s fembot, Alicia Vikander.

Best Foreign film for LA was Son of Saul, something I hope will carry it all the way to the Oscars – though I note that it’s not eligible for BAFTAs as Curzon are not releasing the outstanding Holocaust drama in the UK until next April.

With films such as The Revenant and Spotlight (gradually emerging as a front runner) still to hit my eyeballs, there’ll be more awards tit-for-tat this week, as well as my own Top 20 and Turkeys of the year.

After this weekend, we must also take note of the advance of Spotlight as a major contender now. The investigative journalism drama, centred on the Boston Globe’s team of reporters uncovering child abuse in the Catholic church, has been winning screenplay awards (for Tom McCarthy), some director gongs, frequent ensemble cast awards (Mark Ruffalo, Stanley Tucci, Michael Keaton, Rachel McAdams) and a couple of Best Picture awards from Critics’ Circles (both online and traditional), so this is definitely becoming one to watch – such a growing groundswell of admiration at this stage often adds up to the film winning Best Picture at the Oscars. I haven’t seen it yet, but will rectify that this week… 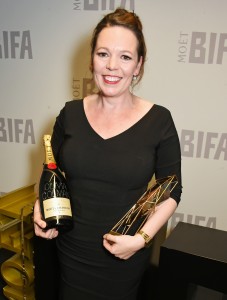 Most Promising Newcomer sponsored by The London Edition

The Discovery Award sponsored by Raindance

ORION: THE MAN WHO WOULD BE KING Jeanie Finlay

Producer of the Year