First of all, let’s deal with the film. Any good, you ask? Probably too hard for me to separate it out as an impartial film critic, but, as an Arsenal fan with more than a little skin in this game (more like my entire soul), I loved it.

I liked its arcs and twists, a documentary structured and plotted like a proper movie: it’s got a villain, in Sir Alex Ferguson; jeopardy in the fragile nature of aiming for perfection in that undefeated season and how it could all crash to smithereens at any moment; it’s got artistry, the way some of those beautiful goals look like dance numbers; it’s got great supporting characters like Wrighty and Henry, Vieira and Bobby Pires. 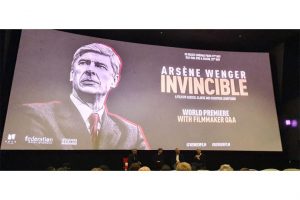 There’s politics and socio-economics in the way Arsene’s team changed the area, made it more cosmopolitan and built a new stadium; there’s philosophy in how to look on life, psychology on how to overcome fear and ego; and, ultimately, it’s a great love story with whirlwind passion and a devastating ending, the story of the gangly, romantic man who loved Arsenal and football too much, so much that he lost himself to them and it broke his hear.

You can’t really ask much more from a movie.

Nevertheless, from a personal point of view, there was so much more involved. It felt like my whole life lead to Finsbury Park Picturehouse this week, all my paths and choices converging.

I guess it was like standing over my last-minute penalty to win the title, or a tricky putt to win the Open. These I will never experience but I got pretty close to some kind of destiny when hosting the Q&A with the man himself, Arsene Wenger, at the world premiere of Invincible.

Film, football, France, Arsenal, Islington, Highbury, Paris, the Emirates – all my favourite things, all pillars of my life and work, all honing in on the little stage in the new cinema round the back of the station.

I hadn’t quite realised the full extent of the personal symbolism of the situation until I got there, but when it dawned on me that the night possessed existential qualities for me, I can’t deny a certain frisson of fear settled in my stomach.

I was about to interview one of my heroes, Arsene Wenger, a man who’s given me some of the greatest highs of my life in football watching terms but for a film, a discipline which has been my life since 1997. However, before that, and you might not know this, I was a football reporter, one of the first to interview Wenger himself, before he even arrived at Arsenal. I was the first English reporter to interview Patrick Vieira, too. 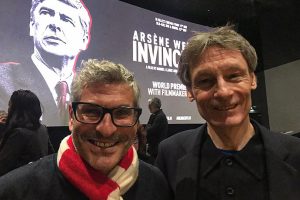 Me and Gabriel Clarke

But I’m also a lifelong Arsenal fan, taken to Highbury in 1975 by my father who, in turn, had been taken there by his father  in 1947, and my father was in the audience tonight. His father before that had even been to see the Woolwich Arsenal, that’s how far back it goes.

I’ve got a French degree and I lived in Paris for a year, becoming obsessed with French film and French football. I even went to see Wenger’s winning Monaco side play in the late 80s. So this was it, the moment I’d been heading to all my life, without ever knowing it: here, in my local patch where I live, with my family present, with my French translation skills needed for Christian Jeanpierre, a man I’d watched host French TV shows, the voice of Les Bleus, and with Gabriel Clarke, a British film maker whose own father’s films had been incredibly influential on me (Alan Clarke, director of such tough classics as Scum, The Firm, Rita, Sue and Bob, Too), and with Arsene Wenger on the screen and about to come on stage to face my questions in front of an audience that included other erstwhile heroes of mine, such as Ian Wright, Lee Dixon, David Seaman as well as family, friends and colleagues and Mikel Arteta. 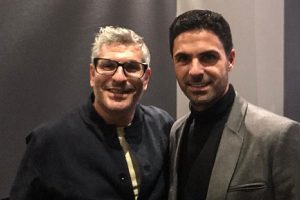 Me with Arsenal manager, Mikel Arteta

Well, it was quite overwhelming as a thought, all that weighing on me. Not only that, but I’m also featured very briefly in this film, on one of my early assignments as a young reporter, having to go to the famous Highbury steps for an impromptu press conference at which the newly-installed Arsenal manager was going to defend himself against apparent newspaper rumours that were about to surface of hideous allegations in his private life. You can spot me in small crowd of journalists that gathered there that evening. I had forgotten that day until I saw it in the doc, how odd and eerie and unpleasant that was, and I saw myself, in my favourite leather jacket that I used to wear throughout my football reporter days (it had great pockets, that fitted my notebook).

I think we all like to see ourselves in the films we watch, to read something personal onto the screen, to imagine ourselves in one of the character’s shoes. But this somewhat different, even for me. I was involved, on screen and off, and the documentary nature of it only served to underline the realism; meanwhile Arsene’s own philosophising on life and dreams, on frailty and perfection, probably helped stoke my intellectualising of the situation.

By the reaction and conversations I overheard in the bar later, the film also meant just as much to so many other people who all know where they were when such a goal went in, or where they were when the team lifted the trophy. People’s stories tumbled out over each other – “I was travelling in Africa”, “I was in a bar in Madrid”, “My wife was in labour”, “I ruined my girlfriend’s birthday and she broke up with me,” “I was there at Old Trafford” (I was at Old Trafford, too, by the way). Football is a bit like the movies, in that if you make an effort to go to it, to watch it somewhere, the experience will imprint on you and the story around it will become as large and cherished as the action on the pitch or screen in front of you.

The only way to deal with such pressure is to trust yourself and your accrued skills which, after all, are what have lead you to this position in the first place. It’s not for me to say if I did so, but the evening went OK and the session seemed to be interesting and go down pretty well and to please everyone, from the producer client who hired me, the directors, Arsene and the audience, which is all you can do. And my Mum and Dad, who got to meet Wenger and talk about the woods in Totteridge. 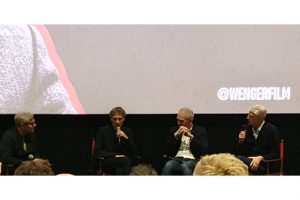 Anyway, after the Q&A, I found myself with Arsene for a couple of minutes before the rest of the audience got up the nerve to come and pester him for selfies. I didn’t mention that unsavoury incident on the steps again but I did tell Arsene another story, about how, before he’d even joined Arsenal and when he was still working out his final days as manager of Nagoya Grampus 8 in Japan, a French journalist friend from sports daily L’Equipe had given me Arsene’s phone number. Sitting at the sports desk of the Daily Express, I’d called it, not expecting him to pick up, but sure enough, he did. And we had, partly in French, part in English, an excellent chat out of which I’d got a decent story for the back page. But after that he also asked me for my opinion as a respected football writer: “What should I do when I get to Arsenal? How is the team?”

I told him in no uncertain terms: “Arsene, you have to get rid of that back four,” referring to the fabled  Arsenal defence including Tony Adams and Lee Dixon, that had enjoyed a couple of unforgettable league titles a few years earlier ( 89 and 91) under the managership of George Graham. “But they’re old now, and too slow, all need to go,” I said. Arsene listened, calmly, taking in all my expert football advice.

Of course when he arrived a week or so later, he took a long hard look and immediately made that same, ageing back four the foundation of his side, cornerstones of his first league and FA Cup double-winning team in 1998.

And that, ladies and gentlemen and Monsieur Wenger, is why, I became a film critic.