I couldn’t review the movie but I was nevertheless lured to the launch of a film called 100 Years at a decadent Soho venue this week.

Billed as “The Movie You Will Never See”, this is a film written by and starring John Malkovich and directed by Robert Rodrigues and shot by DP Claudio Miranda, who did The Life of Pi. But the film is now locked in a safe and will not be shown for 100 years.

I love that idea, that concept. It’s the brainchild of Ludovic du Plessis, a flamboyant Frenchman now in charge of the venerable cognac Louis XIII (that’s Louis Treize to you), and this is his rather whizz marketing ploy that cleverly plays on idea of time and art.

What a luxury to make a movie that’s now bottled up and maturing for 100 Years. He’s even organised the premiere for 2115 on the Louis XIII estate and given out solid silver invites for people to pass on to their grandkids. (I’m waiting for mine…)

As I say, I haven’t seen the movie. According to Ludo, nobody has, apart from Rodrigues himself and the editor. Not even Malkovich has seen the final cut and Ludo, who produced the film, has only seen sections and what he was allowed to view on set visits in LA. All copies on drives and computers have been wiped so all that remains is the reel, now sealed in a silver canister and trapped behind bullet proof glass in a time-locked safe.

I did wonder, if it’s now transferred onto good old-fashioned film, if anyone will be around to show it in 100 years’ time – I mean projectionists are a sadly disappearing breed. However Ludo assures me, he’s already bought the projector on which to show his reels and there are strict instructions on how to operate it and screen the film. Oh, and how lavish the party after must be. “A Great Gatsby party,” Ludo tells me.

Louis XIII takes 100 years to blend and concoct – and I can tell you that, though I’m no drinks critic, if the movie is anything like as smooth, elegant and dynamite as the cognac, then those lucky 1,000 invitees are in for a good night in 2115.

The film and its surrounding safe are now on a bit of world tour, one staging post of which, I can reveal, will be at the Cannes Film Festival in May, whose new boss Pierre Lescure was as intrigued by the idea of a film “not coming soon” as I was.

The more you hype it, the more precious an object becomes in this day and age, which is surely part of the experiment in terms of marketing and in terms of testing out the endurance of art and antiquity. But people are hungry and greedy – Ludo has already had several enticing offers for private screenings of the film, offer that sound more like indecent proposals. “One guy said he’d pay me $1 million just to see the film,” he told me. “But I won’t budge – it would ruin the whole concept and anyway, I seriously can’t open the safe, not even for $20 million…” 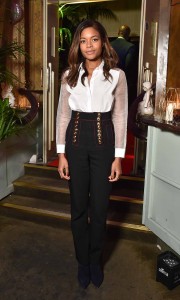 In one of the more extraordinary QnAs I’ve ever done, it was a pleasure to be with Ludo and open that safe and see a film canister in there, gleaming like precious treasure. I felt like John Travolta and Samuel L Jackson with that briefcase in Pulp Fiction…

Good to see a few nice film folk at the party, too, including actress Olivia Grant and the brilliant Naomie Harris – it felt good to have Moneypenny nearby as the safe’s clock counted down, a clock not even her mate Bond could stop.

So it’s good to know, too, that somewhere, in the country where it all began, in a corner of Cognac, cinema and celluloid will be alive and well 100 years from now. I’ll drink to that.